Disability Rights California’s Peer Self-Advocacy (PSA) Program advocates for and oversees the California Memorial Project (CMP). The CMP’s mission is to honor and restore dignity to individuals with mental health and developmental disabilities who lived and died in California state institutions.

California Memorial Project: Remembering Those Who Were Forgotten

Disability Rights California’s Peer Self-Advocacy (PSA) Program advocates for and oversees the California Memorial Project (CMP). The CMP’s mission is to honor and restore dignity to individuals with mental health and developmental disabilities who lived and died in California state institutions.

We help fight the mental health stigma and discrimination
we experience as peers by remembering those
who came before us.

The CMP continues to recognize our peers from the past. Now we are adding a new and valuable focus, to acknowledge residents who presently live in those same institutions for mental health “treatment.” We decided to talk with residents who have lived most of their adult lives inside a state hospital in honor of our peers who have gone before us.

We celebrate the 3rd Monday of each September as California Memorial Project (CMP) Remembrance Day. On this day, the CMP holds remembrance ceremonies throughout California at state institutions and local cemetery gravesites where these individuals were buried. Leading a statewide moment of silence, we honor and celebrate the lives of all our peers.

If anyone wants to share their personal story of having lived in a California institution, email : californiamemorialproject@gmail.com

The 20th Annual California Remembrance Day ceremony was held on September 19, 2022. We had a virtual ceremony via a Zoom webinar instead of in-person ceremonies to take precautions during the time of the COVID-19 pandemic.

Since we presented the ceremony virtually, more people from throughout the state was able to attend since they didn't have to travel to a physical location. Our CMP Remembrance Ceremony has now become a well-known event throughout California and across the nation!

Gone, But no Longer Forgotten:
The California Memorial Project (Video)

From the 1880’s to the 1960’s, over 45,000 people with mental health and developmental disabilities lived and died at California state institutions.

Most were buried anonymously in unmarked or mass graves, identified only by numbers that disappeared long ago. They died without the recognition and acknowledgment they deserved as human beings, in life or in death.

Peer advocates worked together for laws to bring back dignity to our peers. They fought the mistreatment and neglect of our peers.

In 2002, Senate Bill 1448 (Chesbro) addressed the terrible conditions of the state institution gravesites. This law provided valuable support for the disability community.

In 2002, we held our first California Annual Remembrance Day Ceremony. With Senator Chesbro’s support, the State Assembly declared the 3rd Monday of each September as California Memorial Project Remembrance Day.

We collected 21 oral histories from different people who have lived in state institutions to hear about their experiences from their own point of view.  By preserving their stories, we are reclaiming our past. We are also conducting research about the disability rights movement to document the history of our peers’ advocacy efforts that now benefit us today.

In addition, we place memorial monuments and hold dedication ceremonies at burial sites at California state hospitals and developmental centers to honor those who were lost.

Some monuments state: "Let no person ever again be removed from the community by reason of disability... Let us honor their memory by reclaiming and healing our past... Let no person ever be laid to rest without recognition."

Caption: These two separate monuments rest at the Stockton Facility. 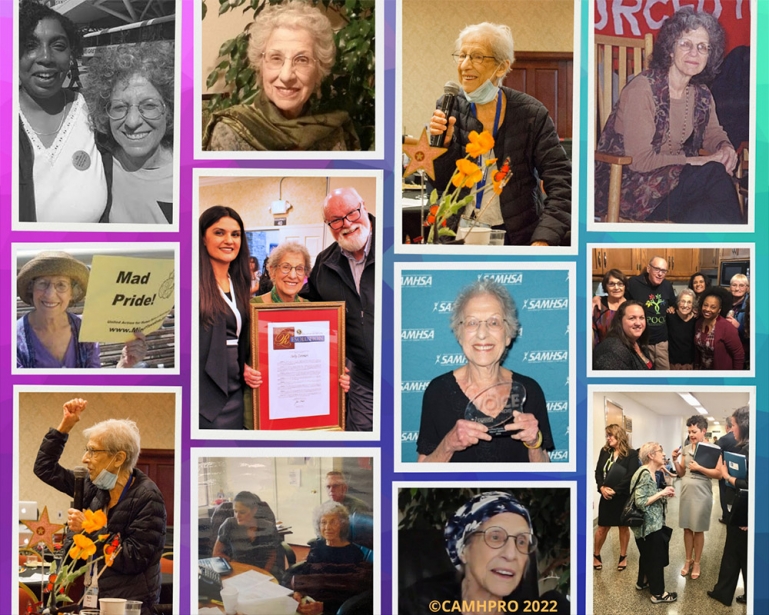 Sally Zinman, a pioneer Peer Advocate from the beginning of the Peer Movement in the 1970’s, passed away on August 25th, 2022. Sally was a fierce and fearless advocate who never stopped fighting against the injustice of involuntary mental health treatment. She worked for 45 years for the inclusion of people with lived experience in every aspect of mental health programs and services. A dedicated and persistent person who wasn’t afraid to speak up, Sally helped provide a strong voice for all peers.

Sally has credits in writing, film, and video. From 1983 -1985, she was the Co-editor of Madness Network News, which was the journalistic voice of the peer movement. Her other credits include: “Self-Help: The Wave of the Future,” (Hospital and Community Psychiatry, 37(3), March 1986); “Crazy Women, Madness, Myth and Metaphor,” (Midwest Films, 1990); and “Museums of Madness,” (BBC/PBS, 1991). In 2022, she received several awards from mental health associations and elected officials, including Mental Health America’s Clifford W. Beers award in honor of her many advocacy accomplishments.

Sally formed workgroups of peer advocates throughout California to promote the passage of and make recommendations to the Department of Health Care Services to implement Senate Bill 803. This legislation provides for the state certification of Peer Support Specialists.

As the leader of the California Network of Mental Health Clients, Sally was a part of the California Memorial Project team since it began in 2002. She has also been very supportive of Disability Rights California (DRC) and has collaborated with us to advocate for many other pieces of mental health legislation.

Self-determination, personal autonomy, and freedom of choice were central to her advocacy efforts. Several months before she passed, she became a key member of Peers Advocating for Rights & Recovery (PARR), a newly formed coalition of peer advocates working to protect the rights of peers. As a PARR member, she worked diligently to help develop a document pointing out the harm and injustice of involuntary treatment. This statement of opposition promoted the array of alternative voluntary treatment options that are peer-led and proven to be very effective. It was submitted to the state legislature in response to California’s CARE Court bill, SB 1338. Sally shared her expressed wish to continue working on this living document so that peer advocates have a compelling and enduring argument against the use of involuntary treatment.

Having battled with cancer for over 17 years, Sally persisted and never stopped advocating until her last day. She leaves a strong legacy that we, as peers, must carry forward to continue to advance the Peer Movement.

In Honor of Darby Penney: CMP Ceremony Presenter - The Life She Left Behind

Darby Penny, a fierce peer advocate who spoke at our 19th annual California Memorial Project (CMP) ceremony this year, passed away yesterday. She had shared her experience and information about a project and exhibit she worked on with Peter Stastny, called “The Lives They Left Behind: Suitcases from a State Hospital Attic.”

When Willard Psychiatric Center closed in 1995, suitcases belonging to deceased patients were found in an attic. The luggage was filled with old photographs, clothes, letters and other belongings dating back to the 1890’s. Here, Darby realized, was material to commemorate those forgotten and marginalized lives.

In 2003, Darby produced a video and exhibit at the Arts Center of the Capital Region, entitled “Here Lies: Abandoned Asylum Cemeteries.” With Peter Stastny, she was Guest Curator for the New York State Museum’s 2004 exhibit “Lost Cases, Recovered Lives: Suitcases from a State Hospital Attic.”

Over the next few years, Penney, photographer Lisa Rinzler, and Peter Stastny, M.D., researched the lives of the suitcase owners. In January 2004, an exhibit of photographs, artifacts and letters – “Lost Cases, Recovered Lives” – opened at the State Museum in Albany. With foundation funding, the exhibit is now being re-created in a traveling version. For more information about the project, go to: http://www.suitcaseexhibit.org/index.php?section=about&subsection=suitc…

Most of Darby’s work focused on the history of psychiatry from the perspective of patients. Prior to the suitcase exhibit, she had collected 200 oral histories from psychiatric patients to document their experiences with the mental health system. The project was the first to document the history of people with mental health disabilities from the perspective of the patients themselves.

She and her colleague Steven Periard received the New York State Board of Regents’ 2003 Archives Award for Excellence in Historical Documentation for this project.

Darby never thought her own psychiatric history would guide her work. In addition to being the quintessential historian, she was a life-long and vocal activist in the movement to protect the human rights of people with psychiatric disabilities. She established and promoted self-help and peer advocacy programs to increase opportunities for self-determination.

To advocate for the use of non-medical, non-coercive healing approaches, Darby, along with other ex-patients and allies, founded the International Network for Treatment Alternatives to Recovery (INTAR). They held its first meeting of alternative practitioners and psychiatric survivors in 2004. She was honored for her work by being named a 2005 Fellow by the Petra Foundation.

For several months, I really enjoyed working with Darby and learning about her work and invited her to speak at our ceremony. She was delighted and excited to share information about the suitcase exhibit and her discoveries from the personal possessions of peers from the past. Her presentation exemplified the meaning and purpose of our California Memorial Project, revealing and remembering the lives of people who might otherwise be forgotten.

Even though I didn’t get a chance to know her very well, she touched me with her passion, curiosity and kindness. I could tell people listening to her speak were intrigued and moved by her stories. We are all very thankful she spoke at our ceremony.

I am sure there is a lot more we don’t know about Darby and the life she left behind. We will remember her and honor her - she was our peer and will not be forgotten.

For more information about CMP,
send an email to: californiamemorialproject@gmail.com

Find out more about our
Peer Self-Advocacy (PSA) Program.