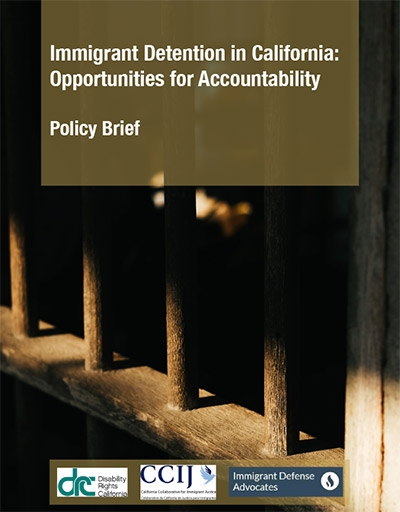 The brief includes an overview of immigrant detention in California, a survey from detained individuals across multiple facilities, and policy recommendations for California officials.

On August 10, 2021, Immigrant Defense Advocates, the California Collaborative for Immigrant Justice and Disability Rights California released a policy brief entitled: Immigrant Detention in California: Opportunities for Accountability. The brief includes an overview of immigrant detention in California, a survey from detained individuals across multiple facilities, and policy recommendations for California officials. The brief was accompanied by a letter to California state officials signed by 50 organizations, urging action on the issue of immigrant detention.
Share:

California is home to eight immigration detention facilities, with the capacity to hold more than 7,400 individuals at any given time. These facilities, used to house those in the custody of U.S. Immigration and Customs and Enforcement (ICE) are operated almost exclusively by private, for-profit corporations. These detention facilities have been plagued with violations of federal detention standards, California law, and detained people’s civil rights. To date, federal oversight of these facilities has proven ineffective and lacking in accountability.

The COVID-19 pandemic has not only highlighted the failure of accountability and oversight in these facilities, but has demonstrated the clear need for the state of California to act to protect the health and safety of individuals in these facilities. California was the site of the first COVID-19 related death in detention in the entire nation, and conditions in the facilities were among the most egregious in the country. In fact, a federal judge ruled that both ICE and the private operator GEO Group “showed a deliberate indifference to the safety of the detainees.”

While California has passed legislation to close private detention facilities, the exact timeline for closure of these facilities remains at issue, and therefore additional steps must be taken by the state.  California can and must do more to not only ensure the basic human rights of individuals held in ICE detention, but to seek accountability for violations of the law that result in harm to California residents and to our communities.

This brief documents systematic violations of detention standards, public health orders, disability law, and California law. It provides a roadmap for oversight and accountability, and specific policy recommendations to remedy the challenges posed by these facilities.

CDPH – Provide clear guidance regarding the roles and responsibilities of public health officials with respect to immigrant detention facilities. 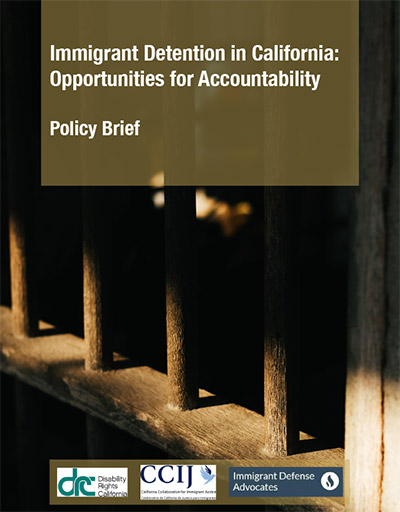