The first year of the 2019-20 legislative session came to an end on October 13, the deadline for Governor Newsom to sign or veto bills passed by the legislature.

In the first year of the 2019-2020 legislative session 2,576 bills were introduced (not including constitutional amendments and resolutions).  Over one-half of those bills either died in the legislature or were made two-year bills which are eligible to be considered in 2020. Of those introduced bills 1,042 made it to the Governor’s desk. The Governor signed 870 bills and vetoed 172 (16.5%). See, How Often do Governors Say No, California Senate Office of Research, October 2019, for a historical analysis.

Over the course of the 2019 legislative year, Disability Rights California Legislation Unit formally analyzed or reviewed 422 bills, resolutions and constitutional amendments in 56 subject areas and took either a support or oppose position on 165 of them and monitored the remainder throughout the year. The majority of the bills were in the health, housing, intellectual/developmental disabilities, mental health, public safety and voting issue areas.  (A summary of the subjects and number of bills DRC monitored is also included).

This year, Disability Rights California sponsored or cosponsored thirteen bills. Six of them made it to the Governor’s desk. Of the remaining bills, the contents of two of them were included in the 2019-20 Budget Act and accompanying trailer bills, one died in the Assembly Appropriations Committee, and five were made two-year bills which are eligible to be considered in the 2020 legislative year. Three of the bills sent to the Governor were signed and three were vetoed. The DRC bills signed or vetoed are included within this summary.

This summary is intended to highlight selected enacted bills affecting persons with disabilities and includes the reasons provided by the Governor for the bills he vetoed. 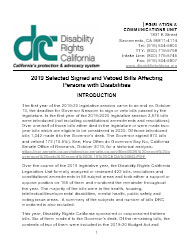 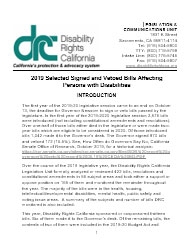