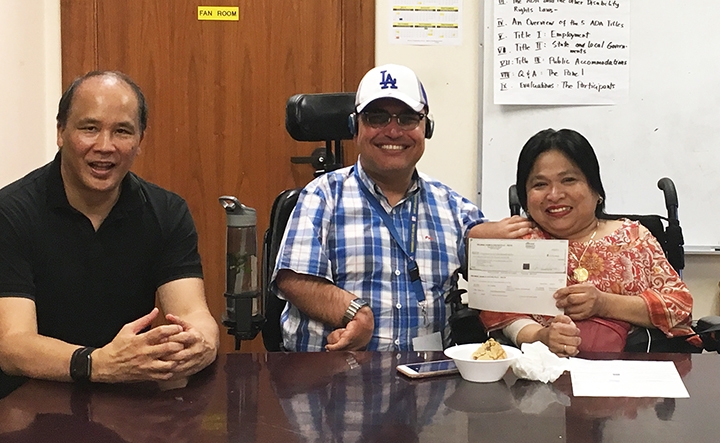 In August 2016, DRC and its co-counsel settled the largest affordable housing accessibility case in the country, securing a significant victory for people with disabilities. As a result of the Settlement, the City of Los Angeles will ensure that at least 4,000 affordable and highly accessible housing units in the City will be built and rented to people who need them, addressing the critical shortage of affordable accessible housing in the City. The case was brought by three nonprofit disability and fair housing advocacy groups that claimed the City’s housing programs were inaccessible to people with disabilities (Independent Living Center of Southern California (ILCSC), Communities Actively Living Independent and Free (CALIF), and Fair Housing Counsel of San Fernando Valley.

The agreement requires the City to ensure that at least 4,000 of its affordable housing units meet the highly accessible standards required by federal law, and will enforce policies to ensure that those units are rented to people who need the specific accessibility features. The City committed to spend at least $200 million during the agreement.  The City also agreed to pay the Plaintiff organizations $4.5 million, which they can use to help people seeking accessible housing.  Plaintiffs also settled with the second defendant, the CRA/LA, and HUD has since entered into a Voluntary Compliance Agreement with the City with additional obligations, resulting in additional accessible units and policies (See below).

The Settlements aim to correct decades of noncompliance with federal accessibility requirements. The addition of over 4,000 units of highly accessible affordable rental housing will allow people with disabilities to get out of institutional settings, like nursing homes, group homes and homeless shelters, and reconnect with their communities. The required housing policies for existing tenants and applicants are some of the most disabilities friendly in the country, and will ensure that accessible units actually go to tenants who need them.

The extraordinary relief obtained in the Settlements with the City and CRA/LA sends a message to state, city and county affordable housing programs in California and across the country that ignoring federal accessibility requirements comes at a steep price.  DRC continues to advocate for increased accessible housing in state and local government housing programs, and Relman Dane, LLP has filed similar litigation elsewhere.

See below for the full Settlements, press releases, and other information.

The case was filed in January 2012. The complaint alleged that affordable housing funded by the City and the Redevelopment Agency had failed to meet the accessibility requirements of federal law, specifically the Americans with Disabilities Act (ADA), Section 504 of the Rehabilitation Act of 1973, and California Government Code 11135. These laws all require cities receiving federal and state money to provide highly accessible units. The complaint alleged that the City and CRA/LA never told developers about the requirements, approved plans that lacked accessible units, and never went into the field to determine whether units were accessible.  The City could not identify any accessible units when advocacy organizations asked for the addresses.  Evidence showed that developments were thousands of units short of the required number of accessible units, and the defendants lacked policies to ensure that accessible units were actually rented to people with disabilities. The result: thousands of people with disabilities were consigned to inaccessible housing, nursing homes, cars, homeless shelters, or the streets of Los Angeles.

Early rulings in the case were helpful.  In the first motion by the defendants to dismiss the case, the judge held that the ADA and Section 504 imposed “program accessibility” requirements on defendants that included an obligation to ensure that private housing development owners receiving public funds comply with accessibility requirements. Other interim victories included orders blocking defendants’ attempts to avoid liability by shifting it to those owners; and an order requiring the defendants to turn over all documents relevant to the more than 700 developments comprising their affordable housing programs including measurements and photographs showing the inaccessible conditions. These victories, expert testimony, and stories from our clients and the individuals with disabilities led to the Settlement.

Settlement with the City

Effective September 5, 2016., the City agreed to a Settlement, effective September 5, 2016. The historic agreement provides that, within 10 years, Los Angeles must ensure that at least 4,000 of its affordable housing units meet architectural standards required by the Uniform Federal Accessibility Standards (UFAS), guaranteeing much larger maneuvering clearances at doors, accessible roll-in or transfer showers, pre-installed grab bars in bathrooms, lowered kitchen counters, greater access to appliances, and units with features for people who are deaf, blind, or have vision and hearing disabilities.. The Settlement covers over 700 properties and all new properties assisted by the City over at least the next 10 years. Properties built or substantially rehabilitated since 2016 must have at least 10% units fully accessible to people with mobility disabilities and 5% units fully accessible to people with hearing/vision disabilities.  This is double the number required by federal and state housing codes.

The City also agreed to enforce policies ensuring that those units are inhabited by people who need the accessibility features, ending the common practice among developers of renting what few accessible units they had built to people who didn’t need the accessibility features.  Requirements included adoption of an online “registry” linking applicants for accessible housing with affordable accessible units, mandatory trainings for all housing owners and management, and adoption of disability friendly policies in all covered properties.

Settlement with the second defendant, the L.A. Redevelopment Agency

Once the Court rejected arguments from the former Redevelopment Agency that changes in its legal status dissolving its prior form did not prevent the lawsuit, plaintiffs also settled with the CRA/LA (Community Redevelopment Agency/LA). In September 2017, the CRA/LA agreed to provide an additional 250 fully accessible units within three years, require owners to comply with City accessibility policies, and pay $3 million in damages to the Plaintiff organizations.

On August 2, 2019, HUD announced that it entered into a Voluntary Compliance Agreement (VCA) with the City of Los Angeles, following an investigation and prolonged negotiations involving claims very similar to those in the Independent Living Center  (ILCSC) litigation.1  After issuing a warning letter in April 2019,2 HUD advised the City of Los Angeles in July 2019 that it would withhold $80 million in block grant funds if the City of Los Angeles did not enter into a VCA.3 The VCA, which will be in effect for 10 years, and is very similar to the ILCSC Settlement. The HUD VCA provides several hundred units more accessible units than the ILCSC Settlement, and requires more existing units to be retrofitted for accessibility. The VCA also requires future construction and substantial rehabilitation to include 11 % mobility accessible units, rather than the 10% in the ILCSC v. LA Settlement.  The VCA also includes an "Enhanced Accessibility Program" initiative for units serving the blind and deaf communities that will incorporate cutting-edge accessibility features into future affordable housing development and provide more of these features in existing units.4

The City of Los Angeles also faces additional pending litigation under the federal False Claims Act (FCA), in which the DOJ alleges that the City falsely certified to HUD that its affordable housing program complied with heightened federal accessibility standards. That case was originally filed under seal in February 2011 by private plaintiffs, but was taken over by DOJ in July 2017.5  DOJ’s complaint-in-intervention alleges that the City of Los Angeles received hundreds of millions of dollars in HUD funding by falsely certifying compliance with federal accessibility standards. DOJ alleges the City of Los Angeles repeatedly certified its compliance with federal accessibility laws to obtain the federal funds, as part of its routine reports to HUD in regard to federal grants, without taking the required steps to ensure it complied. Available remedies under the FCA include three times the actual damages and civil money penalties for each false claim or representation, an alleged potential liability in excess of $2 billion.6

Current Information about Implementation of the ILCSC Settlement:

Finding Accessible Units in the City of LA

The City of LA’s web “registry” under the Settlement provides an on-line database of all subsidized housing covered by the Settlement (over 700 projects) and allows applicants to search for fully accessible units and apply for them on line. The registry became fully functional this year and is being further updated to be more accessible and informative:

Copies of the most current fair housing policies in place under the Settlement for tenants and applicants  (and owners) can be found at:

The list of all covered housing developments is at: https://lahousing.lacity.org/AAHR/ComCon/Tab/RenderTab?tabName=Property… .