Suit follows years of documented disability and race discrimination by the District.

SACRAMENTO, Calif. (Sept. 6, 2019) – A coalition of nonprofit advocacy groups filed a lawsuit today against the Sacramento City Unified School District (SCUSD), Superintendent Jorge A. Aguilar, and others on behalf of the Black Parallel School Board and three students in the District. The suit alleges flagrant districtwide discrimination against students with disabilities, especially Black students.

“SCUSD routinely violates the rights of students with disabilities, particularly Black children with disabilities, by denying them the services and supports they are entitled to,” said Darryl White, Chairperson of the Black Parallel School Board. “Instead, the District tends to unfairly segregate and punish these children.”

In 2017, the Council of Great City Schools, a coalition of 75 of the nation’s largest urban public school systems, released a damning report on the state of special education in the District that validated these long-standing deficiencies. The report was described as a wake-up call by the District, Superintendent, and several School Board members, who vowed to ensure equal opportunities for all children in the District. Sadly, the District did nothing in the year following the report.

In 2018, nonprofit advocacy groups met with Superintendent Aguilar to express their dismay over the District’s continuing failures and demand immediate action. During this meeting, the District promised meaningful reforms and asked for more time to come into compliance. Today, more than two years have passed since the report was published, and the District still has not taken meaningful steps to fix its broken systems and serve students appropriately.

“The District’s failure to act on well-known systemic deficiencies shows a blatant disregard for the education and futures of its students with disabilities,” said attorney Carly Munson with Disability Rights California. “Our clients are paying the price. In 2018, only 61.9 percent of the District’s seniors with disabilities graduated from high school.  And, of those students, only 4.1 percent were prepared for college or a career according to the District’s own public reports. That’s unconscionable.” 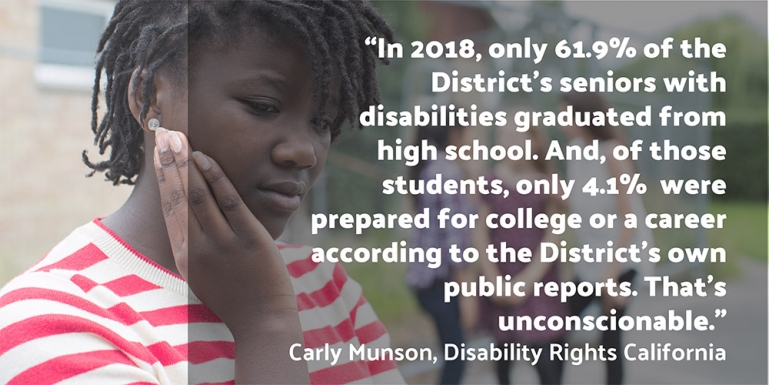 “The District’s mistreatment of students perpetuates biases and stereotypes rooted in slavery and Jim Crow that create a false narrative of Black students as violent, in order to justify segregation, restraint and exclusion,” said attorney Mona Tawatao of the Equal Justice Society.

Tragically for the affected students, this systemic mistreatment has earned the District the shameful distinction as the District with “the most egregious suspension district for Black males in the State of California,” according to a 2018 report issued by the California Community College Equity Assessment Lab.

“Our lawsuit asks that the District take several actions,” said attorney Michael Harris of the National Center for Youth Law. “These include reforming its policies, procedures, and practices to fully comply with the law so that they no longer segregate or discriminate against students with disabilities, including Black students with disabilities; implementing a plan to correct violations and create a safe, inclusive and welcoming environment for these students; identifying and holding accountable those staff responsible for violations of the laws; and identifying all students with disabilities and ensuring they receive the services and programs they are entitled to under the law.”

Fourth-grader Konrad has been diagnosed with Autism, dyslexia, and Attention Deficit Hyperactivity Disorder (ADHD). Beginning in kindergarten, SCUSD refused to properly assess him or address his disability-related needs. Instead, SCUSD defaulted to exclusionary and discriminatory tactics – first shortening his school days, then suspending him repeatedly for his disability-related behaviors, and finally suggesting that he dis-enroll from school entirely. During the 2018-19 school year alone, Konrad – one of only a few Black students at his school – was formally suspended for 17 days – the equivalent of almost a month of school.

Fifth-grader Stephen has been diagnosed with Autism and Anxiety Disorder. Despite a lifetime in SCUSD, Stephen has never received the mental health services he needs to be successful in school, nor has he had a teacher credentialed to work with students with Autism. Stephen – also one of only a few Black students at his school – has been called racial slurs without consequence and sent home from school on at least 80 occasions for manifestations of his disabilities. Rather than provide lawful and necessary services, SCUSD has repeatedly excluded and punished Stephen.

Eleventh-grader Kurtis also has a history of trauma and known mental health conditions. He aspires to attend college, attend prom, or participate in a Regional Occupational Program. Sadly, like Alyssa, Kurtis has been relegated to a nonpublic school that does not provide the same classes or social rites of passage as traditional public high schools. Kurtis fought to attend a public school for ninth grade but was subjected to hostile and discriminatory conditions. He was targeted by peers with homophobic and racial slurs; staff posted a sign outside his classroom proclaiming the students were “Emotionally Disturbed.” Eventually, Kurtis, who is also Black, was unilaterally removed from his high school for behavior that SCUSD explicitly acknowledged was disability-related and sent back to a nonpublic school for students with disabilities. Kurtis is frustrated, bored, and will not be ready to enroll in college or get a job when he graduates next school year.

If you are a parent of a child with a disability within the Sacramento City Unified School District (SCUSD) and are experiencing similar concerns mentioned in this lawsuit, please contact the Disability Rights California confidential intake line at 1-800-776-5746, available 9:00 am - 4:00 pm, Monday through Friday.

Disability Rights California (DRC) is the agency designated under federal law to protect and advocate for the rights of Californians with disabilities.  The mission of DRC is to advance the rights, dignity, equal opportunities, and choices for all people with disabilities. DRC is a member of the National Disability Rights Network (NDRN). NDRN is a nonprofit membership organization for the federally mandated Protection and Advocacy (P&A) Systems, the largest provider of advocacy services to people with disabilities in the United States. disabilityrightsca.org

The Equal Justice Society (EJS) is transforming the nation’s consciousness on race through law, social science, and the arts. Led by President Eva Paterson, the organization’s legal strategy aims to broaden conceptions of present-day discrimination to include unconscious and structural bias by using social science, structural analysis, and real-life experience. EJS targets its advocacy efforts on school discipline, special education, and the school-to-prison pipeline, race-conscious remedies, and inequities in the criminal justice system. EJS also engages the arts and artists in creating work and performances that allow wider audiences to understand social justice issues and struggles. equaljusticesociety.org

National Center for Youth Law leads high impact campaigns that weave together litigation, research, public awareness, policy development, and technical assistance. The Center’s goal is not to reform one particular system, but to transform the multiple public systems serving vulnerable children – including education, child welfare, public health, behavioral health, juvenile justice, and workforce development – such that they receive the supports they need to advance and thrive. youthlaw.org