(Riverside, CA) On July 15, 2020, Disability Rights California, Barajas & Rivera APC, and Disability Rights Education & Defense Fund submitted a tort claim to the Moreno Valley Unified School District (MVUSD) on behalf of an 11-year-old Black student with disabilities who was discriminated against by school police. The claim gives formal notice to the District of the harm that the student endured and seeks to eliminate such discriminatory disciplinary practices and replace them with meaningful accommodations that protect and support not only students with disabilities, but all students.

Over a four month period, a Black 11-year-old student with disabilities was handcuffed four times by school police officers for exhibiting disability-related behaviors that posed no safety threat.

The District knew this student has disabilities, including Attention Deficit Hyperactivity Disorder (ADHD) and Opposition Defiant Disorder (ODD). Yet, the officers escalated matters by handcuffing him as punishment for disability-related “defiance.”

Today, a video of one of these handcuffing instances is being released. As shown in the video, school police officers handcuff this 4’8”, roughly 70 lb. student, pin him facedown, and press a knee into his back.

This preventable situation illustrates how the presence of law enforcement and the use of physical force in schools hurts and traumatizes students. In addition to seeking relief for this student, the filing also demands the District make systemic changes to ensure other students with disabilities, especially Black students, do not endure similar abuses in the future.

“My son did nothing wrong in these situations. A couple of smart comments get you thrown out of your seat, handcuffed, and kneed in the back. He’s just a little 11-year-old. The District needs to stop treating kids as if they are criminals. Schools need to change. Kids should feel protected when at school like they do when they’re at home. School police should not be involved, especially when they are not trained to deal with kids. Since this has happened to my son he tells me police do not like Black people. We need to change for the better of our community and show the kids we care,” said the child’s mother.

“Police and school officials lied to us after aggressively snatching our son, an 11-year-old Black boy with disabilities, from his desk in his special education classroom and slamming him to the floor, using a knee on his neck to handcuff him. The officer said my son was acting threatening to staff, threatening to officers, and a threat to himself. Body camera footage shows he was just sitting at his desk with his head down. We are asking for immediate removal from duty of all the officers involved. We also want all resource officers to be removed from the school system. If my child’s story is not enough evidence that resource officers should not be in the school system, then everyone ask yourself, ‘What if this was my child?’ We want resource officers replaced with caring counselors, caring staff members, and more caring teachers,” says the child’s father.

"All students—including those with disabilities—have the right to feel safe at school. The reliance of MVUSD on police force is contrary to that right, and is harmful, especially for Black students,” reminded Malhar Shah, Staff Attorney for Disability Rights Education & Defense Fund.

“Over-zealous discipline policies, like those of the MVUSD, that place police into schools and encourage harsh tactics push students, especially Black students with disabilities, out of the classroom and into the criminal justice system for conduct that is typical adolescent behavior. Studies have shown that a child who has been suspended is more likely to be held back a grade, to drop out, to commit a crime, and/or to end up incarcerated as an adult,” says Maronel Barajas, Partner at Barajas & Rivera, APC.

Disability Rights California (DRC) - Is the agency designated under federal law to protect and advocate for the rights of Californians with disabilities. The mission of DRC is to advance the rights, dignity, equal opportunities, and choices for all people with disabilities. For more information visit: https://www.disabilityrightsca.org

The Disability Rights Education and Defense Fund (DREDF) - Founded in 1979, is a leading national civil rights law and policy center directed by individuals with disabilities and parents who have children with disabilities. DREDF works to advance the civil and human rights of people with disabilities through legal advocacy, training, education, and public policy and legislative development. Learn more at https://www.dredf.org 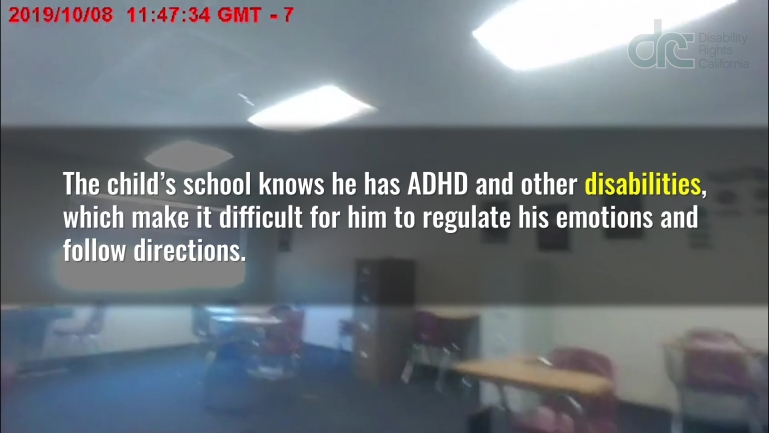