ATTORNEYS FOR SPECIAL EDUCATION STUDENTS ANNOUNCE VOLUNTARY DISMISSAL OF FEDERAL LAWSUIT: “OUR OBJECTIVE HAS BEEN MET”

ATTORNEYS FOR SPECIAL EDUCATION STUDENTS ANNOUNCE VOLUNTARY DISMISSAL OF FEDERAL LAWSUIT: “OUR OBJECTIVE HAS BEEN MET”

March 22, 2011 - Today, Public Counsel Law Center, Disability Rights California, Disability Rights Legal Center, Mental Health Advocacy Services, and Gibson, Dunn & Crutcher announced that they have achieved their immediate objectives in the federal lawsuit they filed regarding termination of state funding for educationally related mental health services for California special education students, and have filed a notice of voluntary dismissal without prejudice, except as to the Los Angeles County Department of Mental Health and its director which fully settled the case with the named plaintiffs and is being dismissed with prejudice.

This federal lawsuit, A.C., et al. v Schwarzenegger, et al. (now A.C., et al. v. Brown, et al.), etc. arose when former Governor Arnold Schwarzenegger vetoed funding for educationally-related mental health services on October 8, 2010. This program, called “AB 3632” after the 1984 assembly bill through which it was created, provided mental health services to approximately 20,000 California children per year. Under AB 3632, these services were delivered by combining the resources of county departments of mental health and local school districts under the joint supervision of the California Departments of Education and Mental Health. The California Department of Education described the wake of the Governor’s veto as a “state of chaos,” as school districts and county departments of mental health scrambled and refused to provide services in response to the overnight gutting of this twenty-five-year-old program.

Named Plaintiffs A.C., A.H., D.H., and P.R. filed this action on October 21, 2010, on behalf of themselves and similarly situated students to address the widespread delays and denials of new services and the threats of immediate termination of existing services. The Plaintiffs filed a request for a temporary restraining order and motion for preliminary injunction, asking the federal judge to order the California Department of Education “to ensure that students with disabilities who require educationally-related mental health services continue to receive these without interruption or delay.” The motion also sought injunctive relief against the Los Angeles County Department of Mental Health, the Los Angeles Unified School District, and the Los Angeles County Office of Education, among others, to compel them to continue providing these critical services to students.

Before the motion could be heard, Plaintiffs secured an agreement whereby the California Department of Education released $76 million of federal funds to continue AB 3632 services that it had previously claimed could not be released due to the Governor’s veto. The California Department of Education also issued new directives regarding the obligations of local education agencies to provide these services, and agreed to exercise its monitoring and enforcement authority under California law to ensure that each school district utilized the funding to provide AB 3632 services. In addition to Plaintiffs’ agreement with the California Department of Education, Plaintiffs procured a stipulated temporary restraining order wherein defendant Los Angeles County Department of Mental Health agreed “to resume and continue to provide and monitor educationally-related mental health services . . . attend [Individualized Education Program] meetings and authorize services, and complete assessments . . . in accordance with the interagency agreements, policies, and practices for carrying out AB 3632 that existed prior to October 8, 2010.”

Within weeks of this stipulated temporary restraining order, all four named plaintiffs began receiving the services to which they were entitled from their individualized education programs.

In December 2010, District Court Judge George H. Wu took the additional step of ordering the California Department of Education to issue a letter to all school districts in California, directing them to immediately step in to provide educationally-related mental health services as they are required to do under federal law.

Several weeks after the Plaintiffs filed this federal lawsuit, schools and counties began filing their own lawsuits in state courts. In County of Sacramento v. State of California, filed November 5, 2010, twenty-three counties sued in a state court in Sacramento County seeking relief from the AB 3632 mandate to provide educationally related mental health services. In California School Boards Association v. Schwarzenegger, filed November 8, 2010, an association of nine hundred school districts sued the state directly in the California Court of Appeal claiming that the Governor’s actions were illegal. The California Court of Appeal ruled that the Governor’s actions were lawful on February 27, 2011, further solidifying the federal and state mandate on school districts to immediately step in to pay for or provide services.

Throughout January, February, and early March 2011, counsel for the Plaintiffs reviewed thousands of pages of documents from districts and county departments of mental health throughout the state and continued to demand that Los Angeles County defendants enter into a memorandum of understanding to ensure the continuation of services. Plaintiffs’ counsel were gratified to see progress in a number of counties, for example Orange and Ventura Counties, where memoranda of understanding have now been executed to ensure that new services are available as necessary and that existing services are not terminated. In late February and early March, Defendants Los Angeles Unified School District, Torrance Unified School District, and Los Angeles County Office of Education finally executed memoranda of understanding with Los Angeles County Department of Mental Health to pay the county to continue to provide mental health services through the fiscal year. The Los Angeles County Department of Mental Health has agreed to inform Plaintiffs’ counsel if any local education agency terminates this agreement.

Counsel for the students are voluntarily dismissing this case in light of their success in securing services for the four named plaintiffs as well as children throughout Los Angeles County and the state, the cooperation in most counties in developing updated agreements with local school districts in response to the court-ordered CDE letter, and the commitments from state defendants. Moreover, there are some positive developments in the state legislature regarding the availability of more stable funding for school-based mental health services in future years.

According to Candis Bowles of Disability Rights California, “our objective – which was to ensure that special education students were protected until the issue of responsibility for their services was resolved - has been met.”

Although they are dismissing the federal lawsuit on behalf of these four Los Angeles students, counsel on the case are prepared to deal directly with remaining school districts and counties that fail to ensure continued mental health services to special education students. In Los Angeles County, counsel will monitor Glendale, Monrovia, and Arcadia school districts, which are the only districts out of some 84 districts in the entire county which have not yet executed the memorandum of understanding with Los Angeles County Department of Mental Health for continuous service provision. Statewide, Plaintiffs’ counsel continue to evaluate problems in counties, such as Contra Costa, Placer, Mendocino, Tulare, and Sacramento, and will take appropriate action as necessary. The California Departments of Education and Mental Health are already on notice regarding the problems in these counties.

John Sharer of Gibson Dunn stated: “We intend to monitor the situation very aggressively and will move rapidly if we find that any children are not getting the services to which they are entitled.”

Laura Faer of Public Counsel stated: “We will make certain state agencies are aware of any new problems that may develop, particularly in light of their clear federal and state obligations and the promises they made in the federal lawsuit to ensure compliance and prevent harm to children with mental illness.”

Counsel encourage any parents, advocates, and program staff to contact them directly if they become aware of any evidence of harm or problems regarding AB 3632 services, or if students need assistance. 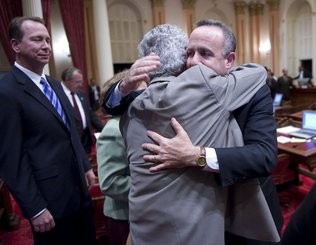