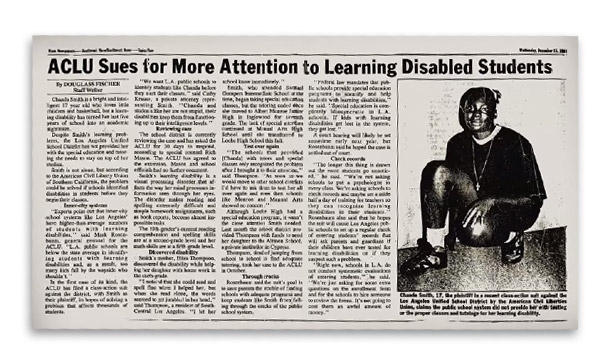 Designed to fit the needs of both service providers and clients, this webinar will explore: the differences between a psychiatric service animal and an emotional support animal; the rights of individuals with psychiatric service or emotional support animals, including the right to public access and reasonable accommodations; and the importance of assistance animals in recovery. 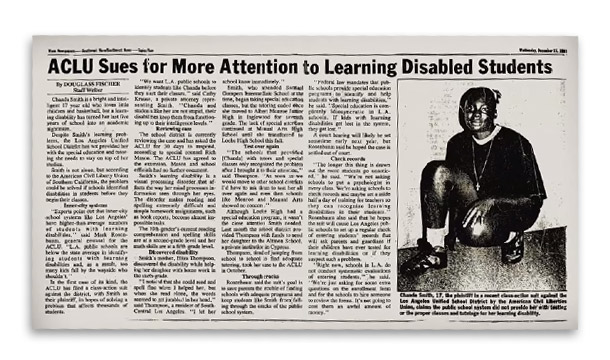 DRC has been counsel for the class of special education students in the Chanda Smith Lawsuit for more than 30 years.

On August 9, 2019, the federal court approved an agreement that will end the 1996 consent decree approved back in 1996. The consent decree addressed Los Angeles Unified School District’s (LAUSD), the second largest district in the nation, failure to meet their legal obligations to provide students with a broad range of disabilities access to appropriate education services. DRC became involved in the case because of its concerns that large number of students with significant disabilities inappropriately received their education in segregated schools or special classes without the opportunity to interact with their peers who did not have disabilities. The settlement also included the monitoring of the Consent Decree by a court approved monitor, who has overseen the district’s progress in meeting the goals of the settlement.

“We appreciate LAUSD’s commitment to the many reforms and initiatives resulting from the Chanda Smith case. We are confident that the district will continue this progress long after court oversight ends,”
Catherine Blakemore, Executive Director, Disability Rights California

Catherine Blakemore, Executive Director of Disability Rights California, was one of the attorneys who helped craft the original consent decree along with Robert Myers of Newman Aaronson Vanaman LLP. Mr. Myers observed that “the District has achieved most of the data-driven outcomes in the Modified Consent Decree, thanks in large part to the tireless efforts of Dr. Rostetter and the Office of the Independent Monitor.”

The litigation resulted in dramatic improvements in the District’s provision of services to special education students in areas such as reduction in suspension, increased graduation rates, translation of Individual Education Plans (IEPs) increased accessibility of schools and more opportunities to receive education in the least restrictive environment.

Some of the specific outcomes are including:

In addition, the District made improvement in developing a; sophisticated system to receive, track, and resolve special education questions, concerns, and complaints; largely parent-staffed and supported Complaint Response Unit helping to resolve thousands of complaints without parents being forced into formal dispute resolution procedures; publicly accessible policy and procedure manuals and other information for parents that is readily accessible on-line; parent Portal providing up-to-date access for all parents regarding their students’ grades as well as current information about the provision of special education services.

Lastly, The District committed more than $67.5 million to improve the accessibility for students with physical and sensory disabilities and ended up spending far more than this amount.  LAUSD spent an additional $20 million on a “rapid renovation” program to remove barriers and improve accessibility at local schools.

1993
The Chanda Smith litigation was filed to challenge the lack of educational opportunities for students with disabilities, and address LAUSD’s failure to comply with its obligations to special education students under the Constitution and federal laws.  Special education students were disproportionately likely to be suspended or expelled, and prevented from attending a general campus. Stark racial disparities in special education revealed the over-identification of minority students, underfunding and indifferent provision of services to those same students. Parent involvement was minimal and only a few thousand Individual Education Plans were translated into parents’ native languages each year. Two independent experts were then appointed as part of a mutually agreed dispute resolution process, determining that LAUSD’s programs failed to comply students with its obligations under special education laws in a range of significant ways.
1996
DRC, the ACLU of Southern California and the law firm of Newman Aaronson Vanaman LLP reached a historic settlement resulting in a detailed consent decree in the case of Chanda Smith v. Los Angeles Unified School District (LAUSD).  The initial decree had two consent decree administrators – Dr. Mary Margaret Kerr and Dr. Louis Barber.   Their focus was to increase the capacity of the District to serve children with disabilities by adding personnel and adopting new plans and policies. This laid the ground-work for performance-based objectives established in a Modified Consent Decree in 2004.

The original consent decree has been modified several times over the decades.