We’ve come a long way, but the fight for disability rights must continue!
Share:

July 26, 2022, marks 32 years since the signing of the Americans with Disabilities Act (ADA).  The ADA was signed into law to ensure people with disabilities have the same rights and opportunities as everyone else.  We’ve come a long way since before the signing of the ADA, but DRC and the disability community continue to fight for the rights of individuals with disabilities.  DRC values all forms of diversity, and we are committed to a culture of belonging where all people are welcome.

Today, we understand that disability rights are part of a broader fight for justice including the unique challenges faced by people who experience the intersection of multiple systems of discrimination. It’s important we recognize these intersectional identities and everyone’s inherent right to freedom, independence, and self-determination.

We celebrate this landmark bill and encourage all of us to reflect on what the ADA means to us and what efforts are still needed for civil rights and equality for all.

As we celebrate this landmark civil rights bill, it’s important to also remember what life was like before the ADA, and why there is still so much for keep fighting for!

Some improvements made from the ADA Include:

Before the ADA, there weren’t any laws set in place that made discrimination based on disability illegal.  Therefore, employers could ask if you had a disability, and if you answered “yes,” they could decide they didn’t want to hire you because of that disability. This type of employment discrimination is now illegal.

It also includes the failure to provide reasonable modifications to an employer’s practices, policies, or workplace conditions in order to accommodate an employee’s or applicant’s disability.

Today, the ADA defines discrimination as the exclusion, segregation, and unequal treatment of people with disabilities in public accommodations. Now, the ADA encourages businesses to provide ramps for wheelchairs, accommodations, better accessible options for public transportation, ride-sharing services, and much more.

There have also been improvements in accessibility in communication access, regulations for service animals, and so much more. We mark this month to celebrate and remember how far we’ve come.

Read more on your rights and what you can do to advocate for yourself. 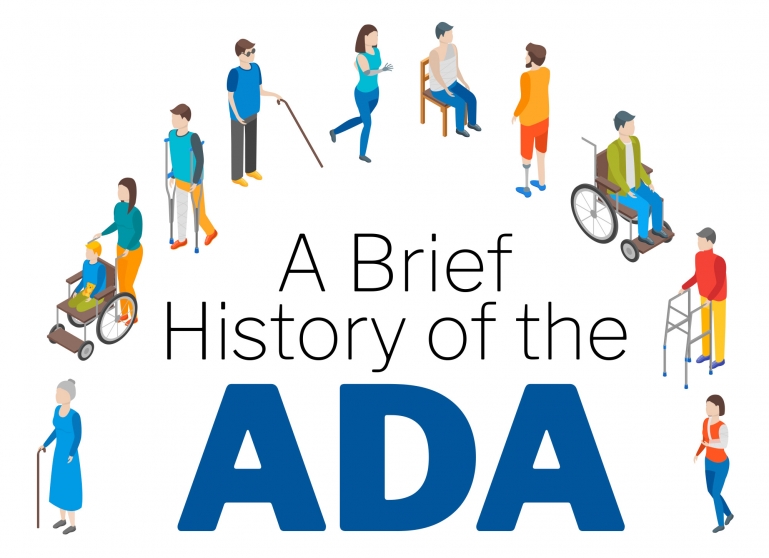 The National Council on Disability issued a report, Toward Independence, which recommended comprehensive civil rights legislation, leading the way for the ADA.

After much work, various drafts of legislation, and overcoming significant opposition from various groups – including religious and business interests – Senator Tom Harkin authored the final bill.

The Olmstead Act, or Olmstead v. LC Supreme Court decision, was based on the Americans with Disabilities Act. The Supreme Court held that people with disabilities have a qualified right to receive state funded supports and services in the community rather than institutions. For more information, visit https://www.olmsteadrights.org/.

The ADA Amendments Act of 2008 was signed into law by President George W. Bush. These amendments broadened the meaning of the term “disability” so that the ADA could be used to offer civil rights protections to more people.

Learn more about the history of the ADA, and what life was like before its passage, with these resources:

Let’s Celebrate & Continue the Conversations on Disability Justice for all!

The passage of the ADA 32 years ago is cause for celebration!  Besides learning more about the history of the ADA, here are some ways we can celebrate this bill which has improved the lives of so many.

Get to know your rights and the rights of your friends, family members, and community members who live with disabilities by checking out DRC’s Self-Advocacy Resources.

Spread the word on Social Media!

Tag us in a social media post and use the hashtags #ThanksToTheADA and #ADA32:

Learn about being an LGBTQIA+ ally and get tips on how to be anti-racist to make sure that our broader fight for disability rights is inclusive of people who may have intersectional identities.

Review Diversity & Inclusion Statements/Mission: Take a look at how you talk about disability in your workplace. Think about inclusivity of all.