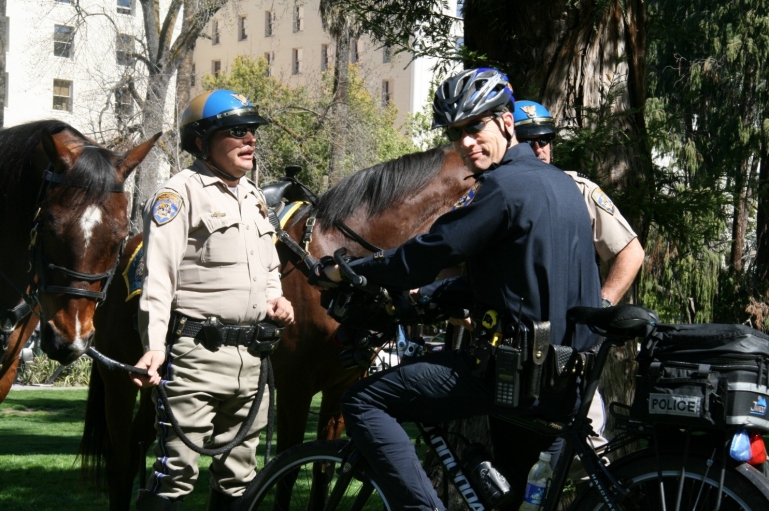 In 1990, DRC, then known as Protection and Advocacy, Inc. investigated the shooting death of Daniel Irvin by Redding police.

On the morning of his death, Irvin spoke with Redding police officers over concerns for his wife and children. He believed someone was holding them against their will.

Several officers described him as nervous, agitated and excited. However, they failed to recognize he needed a psychiatric evaluation.

Later that day, an officer saw Irvin walking down the street with a sword in each of his hands and called for more officers to respond.

As more officers arrived on the scene, Irvin panicked and became angry. Eventually, police tased him. A squad car hit him before an officer fired two rounds, killing him.

DRC’s work continued in 1998 with the investigation of the shooting deaths of Charles Vaughn, Sr. and Marvin Nobel — two men with mental health disabilities. Police officers shot and killed both men in 1998 while separately trying to take them in for psychiatric evaluations. In both cases, police responded to requests from mental health staff who described Vaughn and Nobel as dangerous.

Officers had not received any training on interacting with people with mental health disabilities besides what was required at the police academy.

DRC called for law enforcement to develop a Crisis Intervention Team Academy, which would provide innovative, vigorous training on how to respond to people with psychiatric disabilities who are undergoing a crisis. As a result, these law enforcement agencies developed extensive training for officers.

DRC also recommended that county mental health and local law enforcement work closely in crises situations and to proactively develop policies and protocols regarding a collaborative response to crises.

Charles Vaughn lived independently in an apartment and received outpatient mental health services from Monterey County Mental Health since the mid-1980s. In the weeks leading up to his death, he had become more withdrawn and mental health staff grew concerned about Vaughn's well-being.

On the morning of May 19, 1998, two social workers from Monterey County Mental Health went to Vaughn’s apartment to try to take him in for psychiatric evaluations. When Vaughn told the social workers that he no longer required their services and did not want to continue with his medication, they called the police for assistance.

When Seaside Police officers arrived, Vaughn once again refused services. Officers and the social workers encouraged him to come out of his apartment. Instead, Vaughn climbed out of his back door and went up to the roof carrying a metal corkscrew.

One officer followed Vaughn onto the roof and sprayed him with pepper spray. When Vaughn quickly moved towards the officer, two other officers shot Vaughn four times, killing him.

DRC investigated the tragic shooting. Investigators concluded that mental health staff did not have enough information to support the claim that Vaughn needed detention or that he posed a threat requiring law enforcement to intervene.

DRC investigated the death of Marvin Noble, a 45-year-old man with a psychiatric disability shot by Ukiah Police.

Noble received mental health services through the Conditional Release Program (CONREP), an involuntary outpatient mental health program for people with psychiatric disabilities who enter the program through the criminal justice system. As a condition of his parole for a 1981 offense, Noble was required to take monthly injections of an anti-psychotic medication and keep all of his appointments

His outpatient treatment had recently been transferred from his long-time therapist, with whom he had a therapeutic relationship of trust and rapport, to a new therapist who had only been with the program for six weeks.

In the days leading up to his death, Noble missed one group therapy appointment and was two days late for his injection. When contacted by staff from CONREP, Noble refused to comply with his treatment plan

Three officers found Noble at the Foster Freeze drinking iced tea and waiting for his food order. The situation quickly escalated after officers asked Noble to step outside to speak with them. Noble stood and pulled out a fixed-blade knife, gestured with it to the officers, and said he was not going anywhere with them. Officers followed Noble as he walked out of the restaurant and made his way to his apartment. They used pepper spray on Noble but with no effect. They also tried to knock the knife out of Noble’s hand and eventually unleashed a police dog. Noble stabbed the dog as it approached him and an officer then fired a single shot, killing Noble.

DRC investigated the shooting. Investigators found no evidence to substantiate CONREP’s decision to bring Noble in for evaluation. The investigation found no evidence to suggest Noble was ever suicidal and a danger to himself. At the time of the incident, the Ukiah Police Department had no policies or procedures regarding how to interact with people who have psychiatric disabilities

DRC surveyed every law enforcement agency in California about whether they offer their officers Crisis Intervention Training (CIT) or any specialized, intensive mental health-training course. DRC also surveyed every POST affiliated law enforcement agency in the State of California regarding their current training in de-escalation and crisis intervention.

The California Peace Officer Standards and Training Commission (POST) invited DRC to serve as subject matter experts on several officer-training courses, including an expanded 8-hour course on interacting with individuals with mental health disabilities in crisis. The training will be required of all field-training officers who instruct and mentor recent police academy graduates. DRC worked with other statewide experts, mental health advocates, practitioners, and law enforcement officers, to identify key issues that field training officers need to address and master. DRC staff sat on an expert panel to develop a tool kit that includes best practices and a how-to guide for implementing successful Crisis Intervention Team (CIT) trainings and programs. DRC also provided assistance in POST courses on hate crimes and interviewing victims with disabilities. The training will be mandatory for all new law enforcement personnel statewide. An estimated 90,000 officers will view the video.